According to an article titled “Liberty’s Challenge” in the official Scout magazine, Boy’s Life, Volume 39, No. 3, March, 1949, it was amidst great fanfare and national attention that the Crusade to Strengthen the Arm of Liberty was launched in February, 1949.  The ceremony took place at the feet of the original Lady Liberty on Bedloe Island in New York.  A three Scout Honor Guard escorted the Spirit of Liberty from within the statue’s base.  She then addressed the attendees.

“To you who are members of the Boy Scouts of America, and in the presence of your President and Chief Scout Executive, I send a challenge to bend every effort to achieve success as you now go forward on your Crusade to Stengthen the Arm of Liberty.” – the Spirit of Liberty

It was at this ceremony that Liberty passed her flaming torch to Mr. Amory Houghton, President of the Boy Scouts of America.  Mr. Houghton then lit twelve additional torches that were presented to Regional Scouts present at the ceremony for them to distribute these burning symbols of freedom to all parts of the country as a token and reminder of Liberty’s challenge. 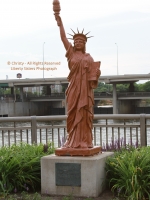 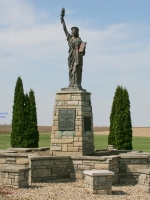 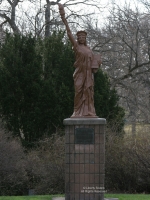 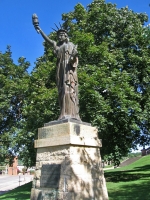 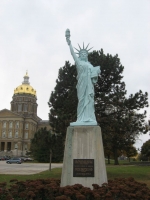 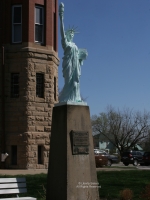 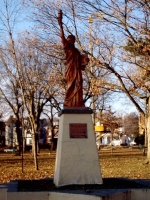 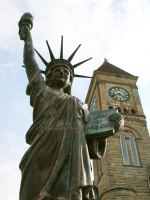 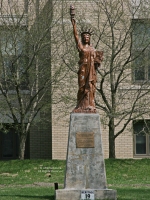 Liberty’s torch was then passed to Scoutmaster A. J. Moutrie of Troop 22, Forest Hills, N.Y.  Mr. Moutrie dedicated himself and all his fellow Scout Leaders across the nation to support the Crusade.  A delegation of Eagle Scouts then moved forward and approached Mr. Moultrie.  Eagle Scout Alan Fritts of Troop 11, Mankato, MN held and unlit torch which Moutrie lit.  Fritts held the torch high.

“We will carry these torches back to our home sections of the United States that the light may be passed on to the representatives of the local Councils in our Regions, and eventually to reach every one of our 70,000 Cub Packs, Boy Scout Troops, and Senior Scout Units.” – Scout Alan Fritts, Troop 11

And so it began.  The magic of radio had broadcast the ceremony live and that broadcast was heard half way around the world.    You can read the complete original article “Liberty’s Challenge” from Boy’s Life.

It was the open minded thinking of J.P. “Jack” Whitaker that conceived the notion that miniature replicas of the Statue of Liberty might serve as a constant reminder to the people of America of the price of the freedom they enjoy every day.  These replicas were intended to remind us how precious our freedom really is.  A sculptor was contracted to develop the miniatures.  It was eventually worked out where a copper replica statue could be bought for only $350.  You can read the details of how they were made in this article.

Most appropriately, the first replica Liberty Sister was dedicated on November 20, 1949 in Whitaker’s home town of Kansas City.  More than 6000 people attended to view the unveiling and hear Dr. Arthur A. Schuck, Chief Scout Executive address the attendees.  Between 1949 and 1951 more than 200 miniatures were sold and distributed to 39 states and territories.

Today, some of these statues have vanished and others are in need of serious restoration before they too slip into obscurity.  It is part of our effort in providing this site to bring those in need of attention to the public eye.  It is our sincere hope that one or more caring individuals or groups may come forward that are willing and able to assist in the proper restoration of those sisters in need where ever they are found.