admin Posted in Uncategorized
1 / 5 ( 1 vote )
Duluth is a seaport city in the U.S. state of Minnesota and the county seat of Saint Louis County. 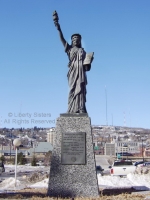 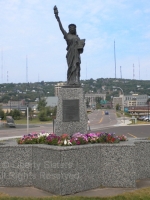 This replica stands atop a granite eleven point star planter base and 5 foot pedestal overlooking the banks of Lake Michigan.   She has an interesting history.

A local resident named Ray Bartholdi grew up believing that he was a cousin of the sculptor that created the original Statue of Liberty, Frederick Bartholdi.  He actually purchased her at an estate sale!  The deceased person had bought it with the intent of donating it to the local BSA troop but somehow never go around to actually doing it.  She sat many years within her original packing material waiting for Bartholdi to find her.  Finally she saw her proper placement in December of 1976.  Here is an excerpt from Zenith City Online:

“Bartholdi later contacted Frank Amendola, then president of the Duluth Builder’s Exchange, and told him of his plans to give the statue to the “children of Duluth” during the nation’s bicentennial celebration in 1976. Amendola called on Duluth’s construction community, who donated $20,000 worth of material and labor to build a granite pedestal in the form of an eleven-point star, replicating the original statue’s base in New York Harbor. Amendola also arranged for the monument’s display.

The statue was unveiled December 11, 1976, in “Arena Park” as the area around the Duluth Arena—today’s Duluth Entertainment and Convention Center—was known. The statue received an unspecified restoration in 1986, and was rededicated on July 4 of the same year—100 years after the original statue was first raised over New York Harbor.”

The entire article “Why Does Duluth have a Statue of Liberty Replica?” by Maryanne Norton published March 4, 2016 can be read here.  It is a pretty good article.

We are always interested in hearing your stories and seeing your historical pictures of the sisters.  If you have a story to share or some images related to our Lady Liberty Sister please use our online form to submit your data.  We appreciate your assistance in keeping this site as complete and up to date as possible.