admin Posted in South Carolina
Rate this post
Columbia is the capital of and largest city in the U.S. state of South Carolina, with a population of 129,272 as of the 2010 United States Census. As of July 1, 2015, the city’s population was estimated to be 133,803. 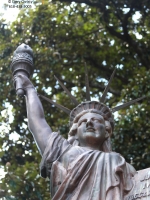 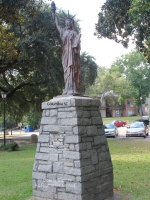 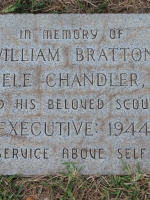 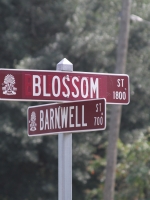 This sister stands within an wooded island created by the intersections of Barnwell, Blossom and Devine streets.  Her pedestal appears to be rough cut lime stone and mortar and reaches a height of about six feet.  She was refurbished by Karkadoulias Art Bronze of Cincinatti, Ohio in 1986.  The process resulted in her missing crown spikes bing replaced, dents were hammered out of her skin and her torch was clad with twenty-four karat gold leaf.  It also left her with a chemically induced golden brown patina.

If you have either images and/or stories related to this sister, new or old, please use our online form to submit your information.  We appreciate all contributions that help us keep this site as complete and accurate as possible!